What Shri Zafar Futehally meant to me

When he moved on to happier hunting grounds last year, the world lost a great earth citizen; I wrote of my loss and what Zafar sahib meant to me, to Mrs Futehally. 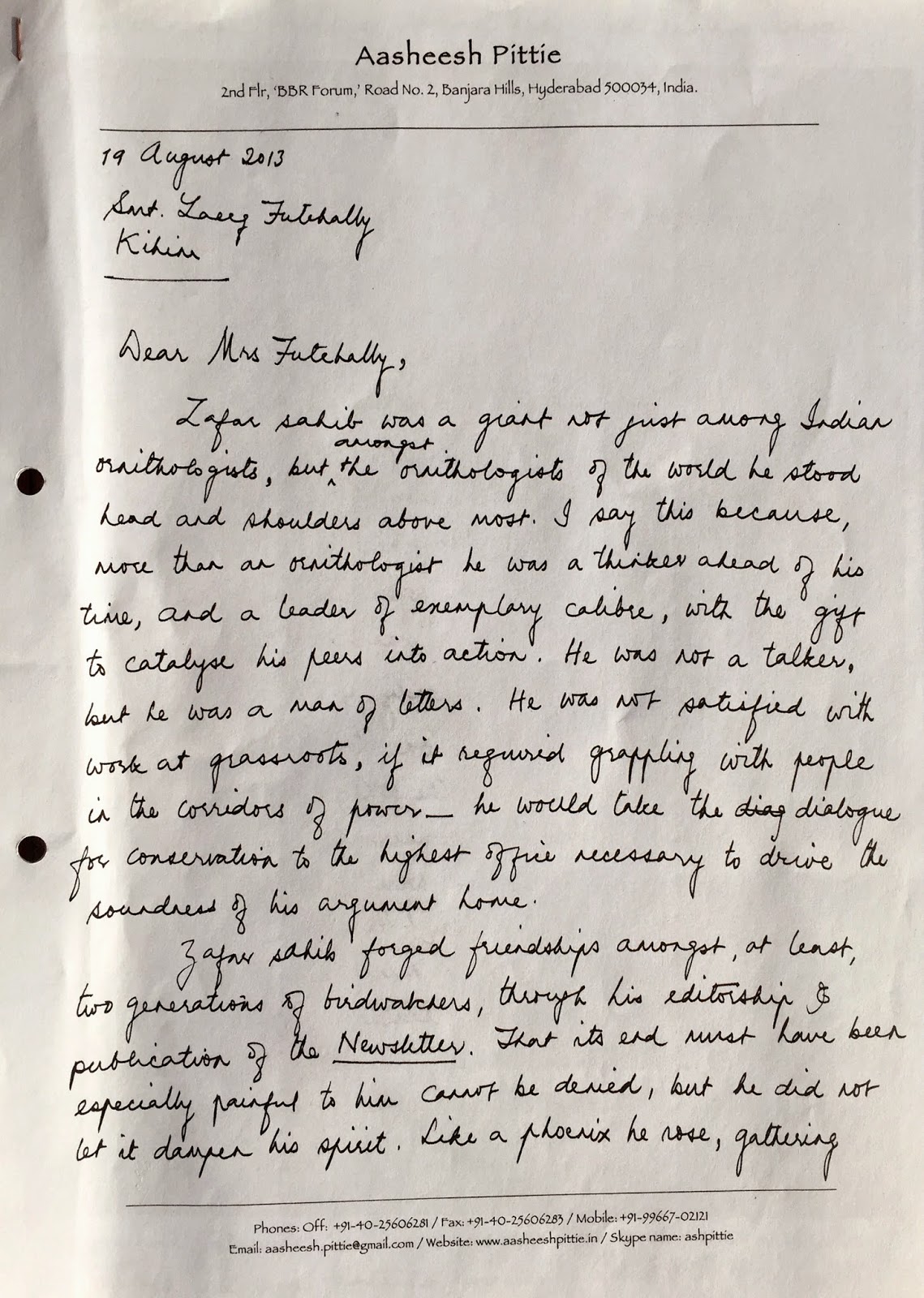 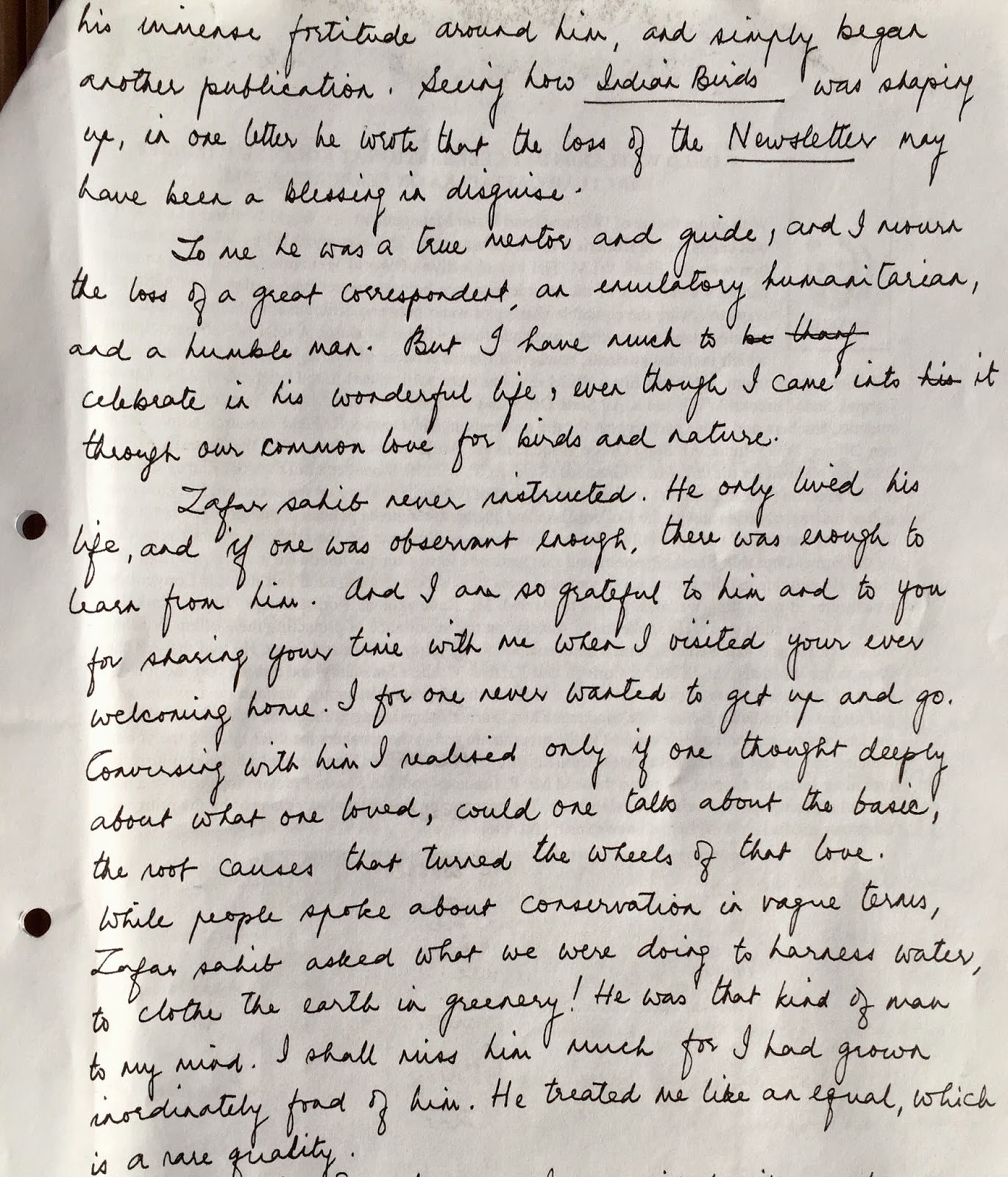 Posted by Aasheesh at 4:32 PM No comments: Links to this post

Posted by Aasheesh at 9:19 AM No comments: Links to this post

Lark song
An early morning sun haloed the landscape in golden light as I drove between fields of ploughed black soil, towards the dump near Patancheru cheruvu, where I hoped to see a frisky Bluethroat prance after insects. Lark song suddenly poured in through the open window, and I pulled over to the side of the track. An Indian Skylark was fluttering somewhere between the sun and me. I could not see it, but that did not matter, for it is one of those birds whose song surpasses its physical appearance in attractiveness.
I simply stood against the car, drenched in the glorious and profuse warbling emanating from his tiny, quivering syrinx. He drifted hither and thither on vibrating wings, exploding with the wound up energy of his voluble performance. I wouldn’t be surprised if his pinions fluttered with the kinetic fervor and excitement that consumed the little creature. I would like to believe that his ecstatic levitation and buoyancy were the result of that full-throated flood of uncontrollable sound rebounding from terra firma in aural waves and cushioning him in the ether.
Listening to him, all else fades away. I squint into the sun, but the bird is unseen, just his radiant melody floods down mesmerizing me with its repetitive strain, its slyly imitative descants, and its clever improvisations. His stamina is monstrous. The performance just goes on and on, never reducing in volume, never slowing down, and never faltering. Minutes pass and the aerial songster’s luminous art abides. What a magnificent moment; to stand still and listen to an invisible bird pouring out his heart through sunlit skies! To spy his partner crouched beside an upturned sod, awash in that rhapsodic serenade! To realize that the world’s magic, its charm, its achingly simple joys, are so easily within our reach; one simply has to connect with nature, or disconnect from artificiality.
When his time in the sun had run its course, his song ended abruptly, as though switched off, and he parachuted on cupped, outstretched wings, landing unobtrusively beside her. No one who didn’t know better, would believe that this superficially nondescript ball of feather was a virtuoso; that such a drab consumer of chitin and seed be so spectacularly endowed.
That is, precisely, the endearing charm of nature. She reveals her secrets at her own pace. Hurry she knows not, neither tolerates she impatience. But silence, stealth, and solitude are handy at divining her mysteries.
Posted by Aasheesh at 9:35 PM No comments: Links to this post

Patancheru Cheruvu
As I eased onto the dirt road that is ICRISAT Campus’s boundary with Patancheru Cheruvu, a Purple Heron stood transfixed mid-way upon a connecting track. Its posture was oddly comical; one leg in front of another, halted mid-step, the beak agape, its entire body stock-still. How odd was that! Normally, it should have taken off at my proximity.
Looking up the road I was to drive on, I saw three mongooses. The fur of one was all ruffled up, as though it had had a vigorous Turkish towel rubdown, after a dipping. Two Herpestes edwardsii were on the right side of the track, and a third emerged under the chain-link fence that marked the boundary. The couple was intent upon something beyond the fence, on Patancheru Tank.
I followed their gaze and through the ipomea-veined links spied a female Marsh Harrier perched gingerly on semi-floating vegetation. She was clearly uncomfortable, shifting her position this way and that.
The mongooses looked distinctly unhappy, almost dying to complain about something. After hesitating for three or four minutes, they crossed the road with much raising and lowering of heads, taking furtive sniffs of the air; with minced, floppy footwork, strangely reminiscent of an indecisive hyena. Their attention evidently was riveted upon the harrier, which, momentarily, rose with an eight-inch limp fish hooked on its talons, landed on firmer ground, and commenced breakfast.
Minutes before this drama Circus aeruginosus was seen harrying water birds, flushing ducks and sandpipers. Clearly it had been on the hunt awhile, as its aggression seemed to flush the birds. But he had no luck with them.
So who killed the fish? Was it the mongoose trio that did it, creating a ruckus over the prey that attracted the hungry bird that pirated away their prize? Or did the harrier come by the fish first and the mongooses simply coveted it? Did the heron at all play a part?
Every moment is filled with the drama of life in the wilderness. Luck, and chance, play their hands in revealing the poignancy of a pageant sometimes, which has its delights. Stealth, patience, and watchful silence are no less powerful tools in a naturalists’ toolbox, and provide the greater satisfaction to an inquiring mind.
The mystery of the behavior of those four creatures remained. Perhaps with my intrusion into their landscape I had perpetrated events that one or the other could not foresee, and a third benefitted!

Eucalyptus plantation, southern perimeter
A Short-eared Owl-sized bird of prey flew away from me on the road bordering the eucalyptus plantation huddled at the extreme southern border of the campus. It must have been perched on one of the trees that lined it.
Straining through the windshield for some distinguishing features on the rapidly disappearing rear profile, all I could register was an ochre brown wash, concentrated in the tail region. Too, that its secondaries were held perfectly horizontal and the propulsion was from an energetic flicking of the primaries, carpal joint outwards.
I had stalled the car in my excitement at the thought of an Asio, and could merely watch as it dipped into the leafy sanctuary about 100 m ahead. My adrenalin draining as it disappeared into the trees.
Viewed upon the horizon from a distance, the trees were impressive, even grove-like. But up close they had the frigid regimentation of plantations. I wondered whether this stood as a windbreak, or for timber. There was no undergrowth. The trees stood like soldiers on parade, at arm’s length from each other. On the other side of the road, a meadow of thigh-high grass flourished.
I drove on, beyond the point where the bird had disappeared, switched off the car and climbed out into a partially tamed landscape. A railway line paralleled away not far beyond ICRISAT’s boundary, and the combustion engine roared periodically on the outer ring road. But once I put that behind me, the land rolled away nicely without an object of artificiality, a scarce commodity in urbania but a solace for concrete-weary eyes!
A hen Montagu’s Harrier coasted the eddies above the platinum blonde grass with such effortless ease that one wondered whether that flamboyance was at all the function of heart, muscle and feather. Entranced I watched her slide and turn and pirouette, and albatross into the breeze to gain height, and slip and curve to catch the invisible element repeatedly under her masterly sensitive pinions. All the time her white-framed facial disc faced earthward focusing owlish eyes and ears on the tiniest movement and breath that betrayed fear, in the feathered or the furred. What a formidable combination of power and grace, of locomotion and concentration, of economy and extravagance!
I walked back, the way I’d driven, pausing now and then expectantly. But no owl flushed. I stood a while, taking in the serenity, and then returned to the car. Just before opening its door I looked along the ruler-straight tree line, and from the apex of a eucalypt, mid-way down that line, a Butastur teesa blazed its white eye at me. Motionless and ramrod straight it stared me down from its height. This was the raptor I’d disturbed and its displeasure lasered me with that lacerating eye. Were its talons kneading its frustration into its perch? Such a soundless moment of heightened consciousness was it, in that pocket wilderness, when I realised that despite all caution and stealth, and desire to mingle, human presence would always remain an intrusion in the world we walked away from.
Posted by Aasheesh at 8:57 PM No comments: Links to this post