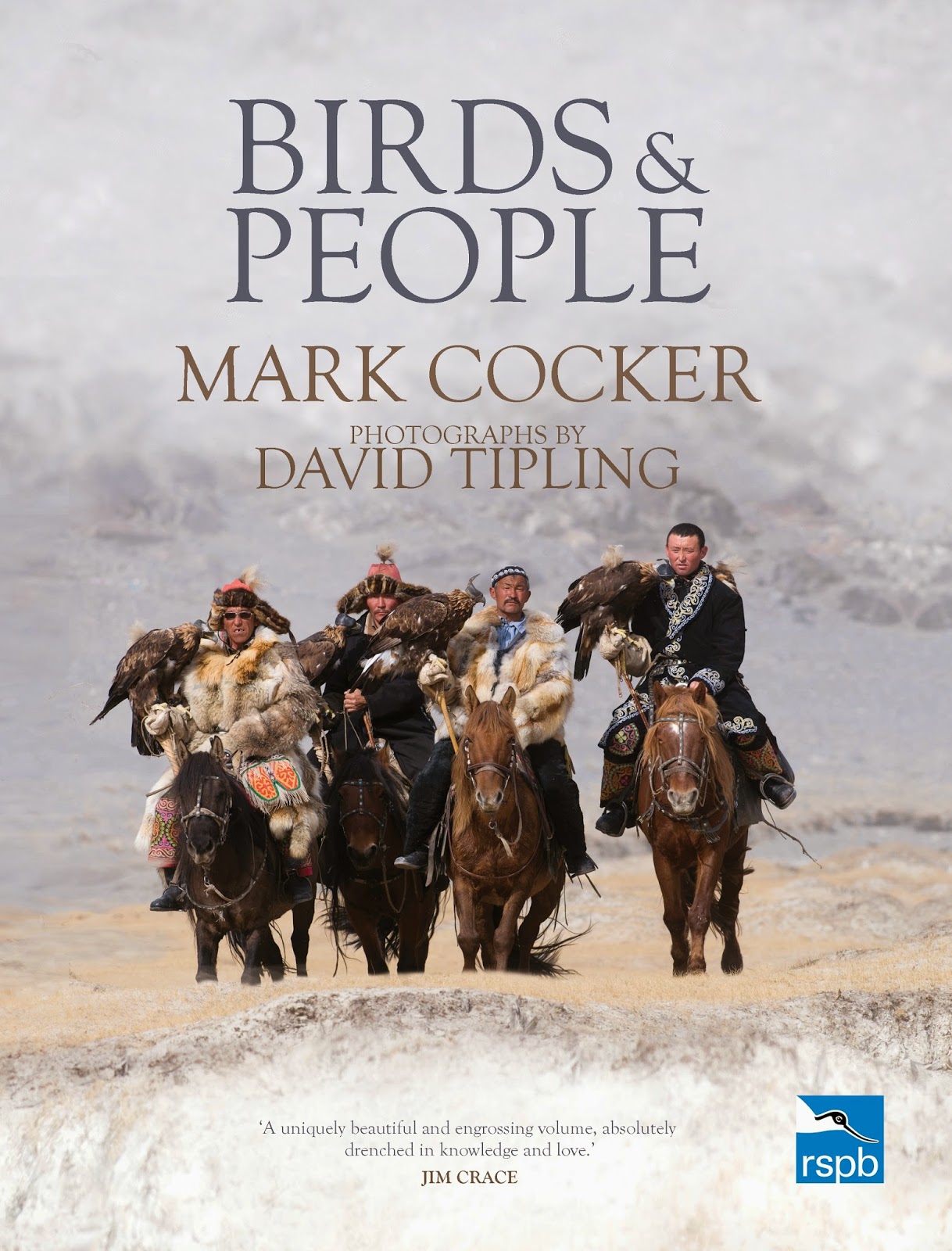 As bird books go, this whopping doorstopper took eight years in the making in which 600–800 people, from 81 countries, responded to the authors’ invitation to contribute. The responses of 300 people were selected and woven into the mesmerising and encyclopaedic tapestry of Mark Cocker’s lucid narrative. Stitched into its landscape are 350 spectacular photographs that David Tipling captured on visits to 39 countries on all seven continents (an enterprise worthy of a book in itself!). Birds and people covers 144 families of birds, of the over 200 families currently recognised, that encompass the world’s 10,500 species (it does not cover 59 bird families).
So what kind of bird book is this, dedicated “to all those 650 contributors from 81 countries…?” “Birds,” says Cocker, “are fellow travellers of the human spirit, and have also colonised our imaginations, as if we were one further habitat to conquer and exploit.” This work then is an evocative summation of the “living lore of birds”. “It is a sourcebook on why we cherish birds” (p. 10). The authors however, are quick to point out that it is far from exhaustive. To do justice to the subject, they say, would easily cover twenty such volumes (p. 11), for mankind and birds share a relationship that goes back in time, perhaps to the very advent of man. Much of this relationship must surely have been lost over aeons, but that which remains as our living lore of birds, is still an enormous storehouse of recorded culture. Yes, birds have indeed affected us so much that they exist as integral parts of all facets of our lives. Birds and people reveals how they feather our literatures, echo in our music, are icons of heraldry in our aggressions, hover in our mythologies, energise our visual arts, pepper our tongues, are food on our tables, ornament our vanities, and even terrorise our frailties.
This book is not so much about birds, as it is about us, and it is not so much about us, as it is about our relationship with these feathered bipeds. It is about how birds have entered our very spirits, at every conceivable level—aural, spiritual, mortal, immortal, physical, mental, victual, and practical. We have absorbed them into our life-streams so completely that we edify them as beacons of our emotions and character—fear, love, wonder, threat, aggression, horror, dominance, depression, joy, valour, grace, and desire, to name a few—even though we cannot, yet, understand those of the birds themselves.
When one writes the history of human civilisation from the point of view of mankind’s interactions with birds, the canvas is immense, stretching into the foggy realms of myth, legend, and prehistory. Multifarious aspects of this imbibing, of bird by man, are explored in Birds and people. It provides an ever-expanding vista of this human-centric relationship, opening innumerable leads into mythology, history, fable, literature, song, film, and art, covering realms at once personal, as well as encompassing the myriad human communities in the world, in an apparently unending journey of discovery, and celebration of our obsession with birds.
The text rejoices with glorious poetry, like D. H. Lawrence’s evocative paean to the wild turkey (P. 46):

“Your aboriginality
Deep, unexplained,
Like a Red Indian darkly unfinished and aloof,
Seems like the black and glossy seeds of countless
centuries.”

Or the more familiar skylark-adulation of Shelley (p. 423):

“Like a poet hidden
In the light of thought,
Singing hymns unbidden,
Till the world is wrought
To sympathy with hopes and fears it heeded not:”

It tells stories: How we’ve pirated the symbolic use of feathers from birds, as implements that enhance behavioural traits, and donned them as ornaments to bolster our own insubstantialities, like the use of feathered ceremonial headdresses. Our fears and superstitions are hounded by bird imagery. Our religious iconography is replete with it. Our heroic glorifications of valour are idolised by invoking birds that are at the pinnacle of food chains, consummate symbols of strength and speed.
But I do not even begin to touch the tip of the iceberg here, the true lodestone lies within its covers.
The more I browse its pages, the more I am drawn into the spell of this mesmerising one-sided relationship, because its cognitive absorption is only our privilege. The bird has no active involvement in this association, besides that of living its life; indisputably unaware of the universally overpowering effect it has had on another earth-dweller.
How many volumes would such a work from India take up, two, three? Multi-lingual, multi-ethnic, multi-cultural India has a man-bird association that permeates her multiplicities in all their mind-boggling diversity—documenting which would be a challenging and fulfilling project for an Indian anthropologist or ornithologist.
This volume mentions India in at least forty entries, and quotes from eight works on Indian ornithology. There are, however, just a handful of Indians listed in the authors’ acknowledgements. This is unfortunate, for the project was widely publicised, and a larger participation from India’s burgeoning fraternity of ornithologists would have brought a lot more to the authors’ table. It is immensely heartening to see a unique facet of Dr Salim Ali’s ornithological contribution eulogised in Appendix 2, “he was also alive to the human ‘story’ in the lives of birds and his observations are full of colour, feeling, wide scholarship and good humour,” (p. 534).


There cannot be a worthier ambassador, than this book, to spread the message of conservation and preservation of birds, and for its immense archival value as a chronicle of humanity’s immemorial need for coexistence with birds. It should find a place in every public and institutional library as a compendium and tool for education, for conservation, for advocacy among administrators, and as a companion for the bird-enthusiast, whatever her level of interaction with the “blithe Spirits” of the natural world, for the sheer joy of reconnecting with them in the comfortable recesses of a reading chair.

5Lovely review , Aasheesh . Compels one to rush to the nearest bookstore to pick up a copy for posterity.